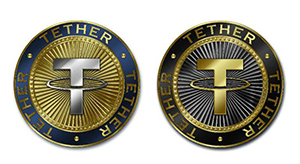 Tether is a Cryptocurrency, based on blockchain technology, which was created to have a virtual equivalence with the U.S. dollar, so its price will always be the same and this has influenced what many call "crypto-dollar". Tether is recommended for those who do not want to speculate with Cryptocurrencies and want to use Cryptocurrencies for businesses without going to the traditional banking system.
Tether has many advantages, for example, it allows to convert the digital currency into cash; It uses the Blockchain technology that guarantees security through the Omni protocol, which is an open source software that interacts with Blockchains to allow the issuance and exchange of Tethers tokens; It can be bought and sold at different Exchange sites.

Another interesting advantage of Tether is that it’s always backed by 1 by 1, which is the equivalent of the traditional currency existing in the company's reserves, therefore, if it has 500 USDT in its possession then it has 500 USD. This linkage to Tether's reserves means that users can use it as a fiduciary currency in the world of cryptography. For traders this Cryptocurrency is very useful, because it allows them to do business without worrying about volatility; In addition, the Tether stands out for its transparency, as the company reserves are made public every day, thus ensuring that all tethers in circulation coincide with existing reserves.
These are not the only incentives, because Tether offers individual users and traders the ability to move the money between the bags and purses, without any need of converting it into Bitcoin first. In addition, these persons guards their own funds and does not have to go through the exchange houses.
The company that issued the tokens, Tether Limited, has offices in Hong Kong, Santa Monica (California) and the east coast of the United States. This company is also responsible for the maintenance of the Web site that saves and transfers the Tether tokens, as well as the integration of Tether with third parties. To date, Tether is among the top 20 Cryptocurrencies for market capitalization. It has a daily operation volume of 2.4 billion dollars and a global market cap of 2.2 billion dollars.
It is becoming increasingly common for online stores and the world's largest companies to accept the Bitcoin and other Cryptocurrencies as a method of payment.