What is Komodo (KMD)? 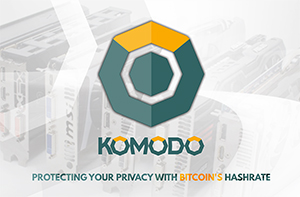 It’s a decentralized Cryptocurrency based on the open source Blockchain, was launched in September 2016. The platform generated from a bifurcation of Zcash, a Cryptocurrency that allows users to remain anonymous while performing transactions.
The Komodo algorithm makes transactions interchangeable, secure and anonymous. Due to this, the platform uses the delayed Proof of Work (dPoW) model. In addition, all transactions are charged with low commissions.
The Komodo platform successfully combines three factors namely: Zcash, delayed Proof of Work and SuperNET.
1. Zcash is a Cryptocurrency that uses the Zero Knowledge Test Protocol (ZKP). This signifies that, all personal information such as private address, the amount of money transferred and other users, remains private and anonymous to other operators.
2. The delayed Proof of Work protocol has become even more advanced thanks to the development of a new level by the Komodo team. It provides greater security thanks to the double-layer protection introduced in your transaction system.
3. SuperNET is a model that develops functionalities of the Nxt Cryptocurrency platform. This permits users to do transactions between centralized and decentralized platforms, considering security an important aspect. Precisely for this reason, the Komodo Cryptocurrency has become the official digital currency of the SuperNET project.
KMD can be purchased from the following exchanges: Binance, HitBTC, Cryptopia, CoinExchange, Upbit and Bittrex. Presently, the only possibility is to make purchases through Altcoin (Bitcoin, Ethereum, Litecoin) and not with Fiat currency.

The best wallets for Komodo

In any case, once you have purchased the KMD coins, you can as well choose to save them in private purses, instead of the exchanges.
The first is called Ledger Nano S, and is perhaps the safest wallet for KMD tokens, as it keeps its private key secure.
Second option is the Komodo paper wallet. As the title says, you can choose to keep your private information in a printed format.
The last one is called Komodo Swing wallet and is Komodo's official purse. Developers recommend this. The wallet is available on Linux, MAC and Windows operating systems.
Therefore, we could define the following Komodo strengths:
• It has a high degree of security thanks to its correlation with the Zcash protocols, delayed Proof of Work and SuperNET;
• It is an open source and decentralized blockchain platform;
• Transactions are expendable, secure and anonymous;
• The platform uses more advanced technology with respect to networks based on the blockchain of Zcash or Nxt;
• You can choose between three solid and secure purses to keep the KMD safe.
The negative aspect, however, as mentioned above, is that, it’s only possible to buy this digital currency through other Cryptocurrencies and not via the Fiat currency.
Komodo ranks 66 according to market capitalization (around US $167 million) with a daily quote of about 1.60 USD (reached its highest point on December 21, 2017 to $12.89). In our opinion, the price of KMD is underestimated, like many other Cryptocurrencies within this period and will certainly give satisfaction to its buyers in the medium or long term.