Venezuela is a Latin American country with the greatest Cryptocurrency-transactions 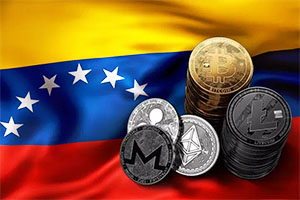 Venezuela has emerged as the Latin American country where more Cryptocurrency-transactions are carried out, ahead of Colombia and even above the transactions carried out in a combined way in Cryptocurrency, Argentina, Peru and Ecuador. Among the different options available, more and more Venezuelans resort to Cryptocurrency 10, recognized as the best platform to exchange Bitcoin, Ethereum and Tether in Bolivares.
One of the reasons for understanding the growth in the use of Cryptocurrencies by Venezuelans is the possibility of sending money abroad. Nicolás Maduro's government limits the sending of currencies, both in US dollars and euros; However, those who creates a Bitcoin, Ethereum or Tether account can recover their funds from the outside and skip the financial controls that Caracas imposes. Currently, so many companies in Venezuela, especially travel agencies have opted not to receive Bolívares, but do accept the Bitcoins as a method of payment.

The fact that the Cryptocurrencies are not regulated, that anyone can undermine them, and that there is no Central bank that supports them, has generated the opportunity for Venezuelans to take them as a shortcut to avoid traditional methods, in a country that has the largest inflation in the world.
Not only Venezuelan citizens takes advantages of Cryptocurrencies, but the government of Maduro has also employed them, as a mechanism to circumvent the economic sanctions imposed by the United States and the European Union. One of the initiatives was to create the "Petro", a Cryptocurrency that has oil assets as a backup.
According to the government, each petro is equivalent to the value of a barrel of oil, which has oscillated in the last months between 60 and 70 dollars. That does not mean that each petro equivalent a barrel, but that the value of Petro is linked to that of Venezuelan oil.
The Petro has an essential difference with the rest of the Cryptocurrencies: It is centralized by an intermediary, in this case the government, whereas the Cryptocurrency have as essential characteristic that they are decentralized, do not belong to anybody, nor regulated by governments, banks or investment funds. Another notable difference is that the Cryptocurrencies can be mined by anyone; Meanwhile, the Petro, according to the White Paper, the mine will depend on whether the users accepts, because at first the offer is 100 million.
Venezuela has also established itself as one of the largest Cryptocurrencies mining centres in the world and even competes with China. The mine is a process that demands a lot of energy, but the South American country has as an advantage that the energy (i.e. labor) there is still very cheap, which makes the undermining a prosperous company.