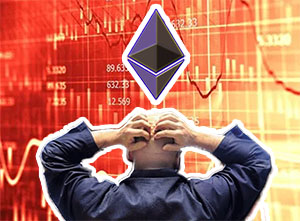 The Cryptocurrencies, Ethereum and Bitcoin, have gone through complicated times in the last days, as both lost value, especially the Ethereum that fell to its minimum in eleven months, below 300 dollars; Meanwhile, the Bitcoin descended from the US $6, 000 barrier.

According to many analysts these declines were caused, above all, by several companies that achieved important collections in their initial currency offers (ICO) and now, when trying to change the Cryptocurrency for the traditional money, they put in circulation a greater amount of Ethereums and Bitcoins, so increased turnover in Cryptocurrencies markets.
The fall in value was not only for Ethereum and Bitcoin, since the majority of the ten most important Cryptocurrencies according to CoinMarketCap, suffered significant losses, located between 4 and 8%, with the only exception of stellar that increased at about 2.5%.

Other Cryptocurrencies with significant decreases were IOTA, which fell by 10.6%; Meanwhile, TRON lost 9 and Neo 11%. Worse went to Tezos, who had a 19% fall, so it was negotiated to only $1.23.
According to CoinTelegraph, the total market capitalization of the Cryptocurrency exceeds $205.5 billion dollars.