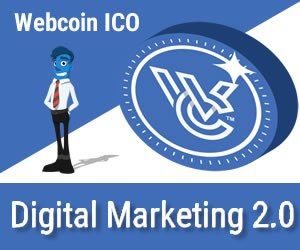 The pre-sale of Webcoin has begun. The commercial procedures will take place on the Webhits.io platform and will be managed by the Webcoin team. The Webhits.io platform allows traffic to “switch” to websites. To work, it will use a new token called “Webcoin”.
The platform will work like a social medium and a P2P exchange service based on interests.
The Webcoin token (WEB) connects the worlds of digital marketing and cryptocurrencies. In fact, it is an ERC20 token utility based on Ethereum’s blockchain technology and is planned to be used as a unified currency for purchasing and selling services inside the Webhits.io platform.
Webhits.io will offer the Webcoin en advertisers, also maintaining a public supplier of long-term sustainable Webcoins.
Each advertiser will, therefore receive an initial amount of Webcoins to trade for the exposition to social media inside the platform.
In addition, the advertisers will be able to obtain the Webcoin also by buying it through the exchanges. Those who don’t want to go through the exchanges will be able to buy them with dollars directly from the proprietary platform at a price increased by 5% to 10% that the average market quotation of the exchanges.
In particular, the mining will be available to anyone with an available laptop, distinguishing it from the existing models based, for example, on proof-of-work. In fact, all of social media’s actions related to the advertising carried out by a miner will be monetarily recompensed with a portion of Webcoin tokens.
Webcoin will maintain a small amount for itself during every operative phase, diminishing the offer in the exchanges and increasing the demand for the currency and increasing its market price.
Webhits.io will randomly select three revisers who will have to examine the web contents and paid social media. Every post will require the approval of two of the three revisers to be sent to the appropriate miners for validation.
The project’s mission is to increase the advertisers’ return on investments and reduce the expenses by at least 10 times for promo-publicity services of websites and social media at a global level.

1. Digital marketing, with the p2p network based on the “most economical interests there are”, which guarantees payments via the web and engagement services on the social media;
2. Cryptocurrencies, with social mining that is different from any other type of mining;
3. Freelancers, thanks to extra earnings from engagement activities.

This way, even retirees, students or the “classical” influencers can earn a little extra every month.
The private sale will last until May 31, 2018. Instead, the pre-ICO will go from June 1st to the 30th; while the actual ICO will be from July 1st until August 1st, 2018.
25 million WEBs will be released from the public sale, to cover the platform’s operational demands for the next three to five years. Anyway, a total release of 70 million tokens is foreseen. The crowd sale will have a 600 ETH soft cap and a 17,376 ETH hard cap. The minimum purchase is 0.1 ETH.
In addition, according to Webcoin’s promoters, more than 400 thousand dollars have been collected during Stage 1, while Stage 2 has already exceeded the 600 ETH Soft Cap. The Alpha version already has more than 20,000 users, while the Beta will be launched during the ICO.
All WEBs left unsold during the ICO will be transferred into the mine pool, increasing the amount of tokens available for distribution among the miners.
For more info and to participate in the private sale: http://webcoin.today.