More than 1.000 Cryptocurrencies have already died 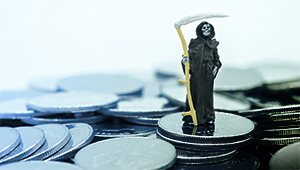 According to data from two platforms, Coinopsy and DeadCoins have already killed more than 1,000 Cryptocurrencies.
Coinopsy provides daily reviews of several Cryptocurrencies, including those considered "dead". According to this site, a token is dead when at least one of the following conditions is true:
• Has been abandoned;
• The website is down;
• No active nodes;
• Has problems with purses;
• Does not provide updates on social networks;
• Has a particularly low volume of daily exchanges;
• The developers left the project.
According to the Coinopsy list, there are currently 247 "dead" coins. Among them is the famous Bitconnect, which concluded the project in January 2018, described by the website as the "best Ponzi scheme ".

The dead coins raised a lot of money

The DeadCoins list includes more than 830 "dead" cryptocoins. These include the initial currency offer (ICO) of Titanium Blockchain Infrastructure Services, closed down by the U.S. Securities and Exchange Commission (SEC) for fraudulent practices.
According to SEC's press release, Titanium raised a total of 21 million dollars. The agency also took the opportunity to warn investors about the dangers of ICO:
"Having dealt with several fraudulent ICOs, we want once again to encourage investors to be particularly cautious in considering such investments."
According to Cointelegraph, in 2018 the volume of ICOs has already reached 13.7 billion dollars, twice the total of 2017. According to TechCrunch, in 2017 fraudulent and now-dead projects would have raised 1 billion dollars.
On June 21, Nasdaq Director General Adena Friedman mentioned that the ICOs pose a threat to small investors, arguing that projects that raise money using such a practice have virtually no supervision.
In June, John McAfee said he will stop promoting ICO projects due to alleged SEC warnings.

dead-cryptocurrencies
Do you need a consultancy?
Book it