Litecoin among the first 6 cryptocurrencies 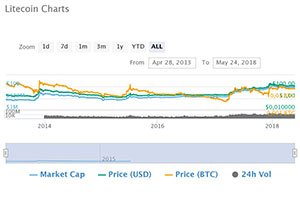 Among the Cryptocurrencies Litecoin is spreading more and more, the least famous "prime" to Bitcoin. The birth of this Cryptocurrency, based, on a technical view point, in the Bitcoin model, is attributed to Charlie Lee (a former Google employee) who launched it on the market in 2011. Litecoin, although similar to Bitcoin, presents some fundamental differences with respect to this. First, the global Litecoin offer is higher than that of Bitcoin, or 84 million pieces, compared to the 21 million of Bitcoin. But the great strength of "digital silver" is given by the transactions speed, in fact the operations carried out through the blockchain Litecoin requires an average of just over two minutes, against significantly higher times required for Bitcoin transactions. Precisely because of this speed, financial analysts considers Litecoin as a much more appropriate currency for payments than Bitcoin, increasingly used as a "value reserve ". Litecoin allows you to have a higher confirmation frequency on transactions and better data retention, as well as allowing you to make instant payments at no cost.

Litecoin is different from Bitcoin

Likewise, Litecoin differs from Bitcoin from a purely technical point of view, more precisely in the algorithmic operations used in the production of digital money, in fact Litecoin produces a greater volume of money, since it generates blocks every 2.5 minutes, i.e. four times faster than Bitcoin, which takes 10 minutes. In this way, transaction timeouts are greatly reduced.
While Litecoin is a copy of Bitcoin, it is optimized to use Segregated Witness and Lightning Network functions, allowing you to process more transactions at the same time. Litcoin uses Scrypt, a function that requires more memory while Bitcoin uses SHA 256.
On the web it is possible to find different open source softwares, i.e., without charge and that do not need a license, useful to make transactions and to be owners of Litecoin.
The procedure through which Litecoin is produced is called “mining" as for Bitcoin, to obtain the Cryptocurrencies, the miner solves a series of complicated mathematical problems, but the reward for the possible solution calculated is of 50 Litecoins for each verified block (12.5 BTC in the Bitcoin blockchain).
The functionality of Litecoin operates in a completely decentralized way, without control by a central authority. The Litecoin graphical user interface (GUI) is optimized and the Hash function improved a lot compared to Bitcoin. Excellent technology has allowed Litecoin to enter into the list of the best Cryptocurencies of all time.
Litecoin is currently among the top 6 in the ranking of the best Cryptocurrencies by market capitalization, with a stock exchange capitalization of approximately 8 billion dollars and a current value (16/05/2018) of 115 euros (136 dollars). From a speculative point of view, it is a currency to buy (even these values) and keep in the purse with a medium/long-term operational perspective (6-18 months). We entered a new LTC position in our wallet last week (informed our subscribers by e-mail).
Owing to their popularity and high visibility, it is now possible to buy LTC in many Exchange; we suggest: Binance, OKEx, Coinbase, GDAX, Bittrex, Krahen, HitBTC, etc.

litecoin
Do you need a consultancy?
Book it