Is the Bitcoin dead? 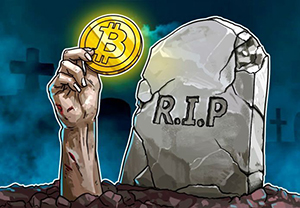 How many times has the Bitcoin been given up for dead? At all-time there are always growing oscillations that generates a variation to the general average, gurus, bankers, false politicians and enemies of the cryptocurrencies, that sentence the death of the Bitcoin.
So, apparently, it's already 300 times that the Bitcoin has been given up for dead... There is a site that has a control of all the times that the Bitcoin has been declared dead: We’re talking here about the "Obituary stats" (Obituaries statistics) section of the www.99bitcoins.com site.
According to this site the very first time the Bitcoin was considered dead was on the 15, December 2010, when 1 BTC worth 0.2 dollars... Last time this happened, it was May 30th, 2018.
There are also statistics year after year: It was given for dead once in 2010, while in 2011 it was considered 6 times as lost. Today records, has the year 2017 with 118 times (almost once every 3 days). 2017 was the year in which the Bitcoin reached its maximum valuation (about 20,000).

Bitcoin is not dead

Instead, with great disgust for its opponents, Bitcoin now, is always active and continuously disseminated globally.
And as many experts would say, "There is no cancel button." Its value could be lowered (or uploaded), but the technology (blockchain) with which it has developed and made virtually unstoppable and invulnerable. Also, those who knows the principles and fundamentals of Blockchain can better understand why the Bitcoin and the other Cryptocurrencies oppose and fight the central banking, business banking, high authorities, certain governments, and political characters.
Therefore, according to us, the Bitcoin will continue to be in existence, whether you like it or not. The worst thing that could happen to it, at all, is that its value becomes unimportant, as at the end of last year, but it is only a hypothesis that nowadays comes to be unplausible, unless unexpected technical problems occur for which there is no solution.
However, we can rest assure that it will periodically be given up for dead and "resurgence" of its "ashes", like the Phoenix. Rather, the higher the price, the more it will be dead, which, paradoxically, an exaggeration in this sense could even be a good sign.