Is Petro a Cryptocurrency? 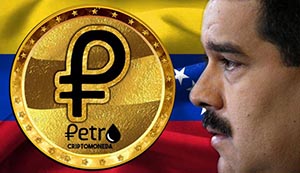 Petro is one of the initiatives implemented by the Venezuelan Government led by President Nicolas Maduro, to try and obtain funds, which can overcome the tough economic crisis that crosses the South American country, plunged in a round of inflation the four digits. But is Petro really a cryptocurrency?
The Venezuelan government, in its initial currency offer (ICO), said that, it managed to sell 100 million of Petros and raised nearly five billion dollars. This was an interesting option, used by Caracas, to obtain funds not linked to the US dollar. These funds have not probably come from the United States or the European Union, as both Washington and Brussels have imposed strong economic and political sanctions on Venezuela, because they believed democracy has been cracked in that nation.
What is the value of Petro? Venezuela tried to link it directly with the price of oil barrel, which is currently on the rise, from the imposition of new sanctions on Iran by Washington and the trade war, launched by Donald Trump. That is, even though allegedly linked to the price of oil barrel, Petro would be controlled by Caracas and this is one of its weaknesses, as it goes against the idea of delinking the governments that characterizes the Cryptocurrency.
Given the foregoing, in fact, Petro is not a Cryptocurrency, but a token or digital asset, backed by the huge Venezuelan oil reserves, considered the largest in the world. When acquiring a Petro, you’re not really buying something that can be freely mined and marketed in a Cryptocurrency exchange house. The petro's mining is controlled by the Venezuelan government, which will decide with what exchange rate to market the petro. So, it's just a mere digitization of a country's debt.
When investors can market the Petro, price volatility is not probably seen as has happened with other Cryptocurrencies, especially because its price will be controlled by the Venezuelan government and will not be linked to supply and demand. Those who have invested in the Petro will be able to verify that it was easy to acquire, but there is doubt as to whether it will be possible to market it, once the ICO has concluded.