Europe is divided over regulating cryptocurrencies 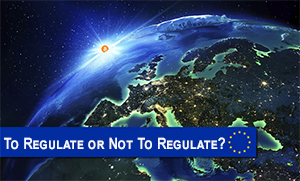 Cryptocurrencies are keeping Europe divided since, whereas various countries are more open toward cryptocurrencies, others prefer regulating a technology that is, per se, decentralized.
In France, the well-known economist Jean Pierre Landau, in collaboration with the Ministry of Economy and Finance, published an in-depth analysis where he expounded on the reasons for which it was not necessary to regulate cryptocurrencies. In this report he advocated for the “minimum principles of transparency, integrity and stability for the exchanges, which must be considered by our legislators as part of the European Union’s future plans for issuing Euro-Bitlicenses,” he stated.
Vladimir Putin’s government, in Russia, now maintains a more open position towards cryptocurrencies. There, “HASH”, the first crypto investment bank, has already been introduced; it was launched by Qiwi Blockchain Technologies, with the objective of retaining Initial Currency Offers (ICO). Experts hope that Moscow quickly approves a regulatory law related to cryptos and blockchains. In Poland, the commerce and mining of cryptocurrencies are officially recognized and is a country that supports blockchains. The Polish Blockchain Technology Accelerator assures that it worked on the development of a national cryptocurrency, the digital Zloty; in addition, the Polish bank, PKO Polski Bank, is associated with the blockchain business Coinfirm to offer a storage and confirmation system for banking documents.

Others European countries plan about cryptocurrencies

Meanwhile, in August of 2017, the Ukrainian Agency for the Electronic Government began an initial plan for selling properties to foreigners investing in the blockchain. One of the European countries where it is possible to appreciate greater support and interest toward cryptocurrencies is Estonia. There is a very modern government program for e-residence which allows any person in the world to present an online request and to become a virtual resident of Estonia. This way they obtain access to the online economic platforms of this country, so they can set up companies and obtain licenses. In addition, Estonia participates in various public service projects that operate with blockchains, among which, health services.
Another Baltic country, Latvia, joined the Memorandum of Understanding, a coalition between the ministries of Estonia and Latvia, with the objective of promoting and expanding the blockchain for encouraging innovations in capital markets. And last, the Central Bank of Lithuania demands a separation between traditional financial services and activities related to cryptocurrencies. Nevertheless, this bank issues licenses cheaply and rapidly, ideal for ICOs.
The positions of the Central European Bank on cryptocurrencies have changed in recent years. If in 2017 this institution seemed reluctant toward cryptocurrencies, more recent declarations indicate an inclination and openness for discussing the cryptocurrencies problems.
European experts agree that cryptocurrencies still don’t have the capacity of replacing traditional currencies, because of its volatility and the lack of the necessary technology; however, in the same measure in which cryptocurrency systems evolve, it will be possible to resolve these problems. In the future, the specialists clarify, the cryptocurrencies and the money issued by the state will coexist and the cryptocurrencies will contribute to eliminating the monopoly of central banking systems.