Ethereum vs. Bitcoin, which is the best Cryptocurrency? 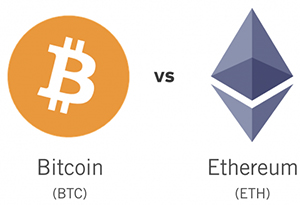 The Bitcoin and Ethereum can be considered as the two most commonly used Cryptocurrencies nowadays, they are compatible but not substitute. Both have similarities, for example, they are decentralized, that is, there is no entity that controls the currencies or transactions, but everything is produced without intermediaries; In addition, both can act as deposits of values and also as transactional means. They employ cryptographic algorithms; But they have many differences.
The Cryptocurrency with the greatest deposit of value is the Bitcoin. At the present time it is, so far, the most recognized of the Cryptocurrencies, reason why it is easier to buy, store and sell. However, there is a strict limit on the final number of Bitcoins, with declining returns as it approaches 21 million, which is the total number that can be created from this Cryptocurrency, which will be reached, allegedly, in the year 2140.
Ethereum takes less time in the market, but has already proven to be very valuable and, unlike the Bitcoin, the Ether has no limits in its creation, so its supply will remain constant and expanding. Ether has quickly positioned itself as a preferred method for transferring wealth to and from individuals and entities. This is demonstrated by the fact that it has already surpassed Bitcoin in the number of daily transactions.
This growth may have impacted that Ethereum can be used as a platform for other Cryptocurrencies, and also because Ether’s transactions are usually confirmed more quickly by the blockchain while those of Bitcoin takes a few minutes to completion, those of Ethereum are liquidated in a matter of seconds. Another important advantage of Ethereum on Bitcoin is that transaction charges tend to be lower.
In Bitcoin there are 8 decimals and their nomenclatures are: Bitcoin, Milibitcoin, Microbitcoin and the smallest unit, the Shatoshi; Meanwhile, in Ethereum there are 18 decimals and their nomenclatures are Ether, Finney, Szabo, Shannon, Babbage, Lovelaces, Wei. Each of them is 1000 times higher than the next.

The biggest difference between Ethereum and Bitcoin is the underlying technology in both. Ethereum is not only a Cryptocurrency, but a special type of blockchain technology that enables Ethers transfers between people and can also be used to create other Cryptocurrencies, decentralized applications (the Ðapps do not need Servers or other entities, but live in the blockchain, like all its content) and smart contracts.
Ethereum can handle much more complexity from its intelligent contract system, therefore, it operates in a much more decentralized way than Bitcoin, although the latter still has a greater impact on the economy. Both Bitcoin and Ethereum have their advantages and when deciding on one of the two (or another Cryptocurrency) the person will have to take into account their financial situation and what they want to invest.
For those who want to buy the most proven Cryptocurrency with the greatest compatibility of developers, then Bitcoin is the solution; although it is more expensive and its transaction charges are higher. On the contrary, if what the person desires is to make transactions, pay goods or services, or send Cryptocurrencies then Ethereum is a good choice, because it offers less obstacles and its blockchain is more open.