Duplicate in number of Cryptocurrency users 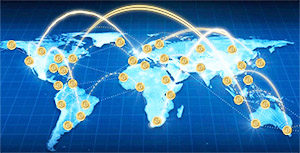 On November 6, 2017, according to present estimates, about 25 million people in the world possessed Cryptocurrencies. At that moment, BTC worth about 7,400 dollars and the speculative bubble of late November/December 2017 was about to commence, which raised prices to about 20,000 USD.
Today, after the explosion of the speculative bubble with BTC about 6,400 dollars, we discovered, from the words of the CEO of Coinbase, that owners of Cryptocurrencies would have increased to more than 40 million, i.e., almost double in less than a year.

In fact, despite the significant drop in price after the bubble burst (from December 18, 2017), Cryptocurrencies users have increased within. Particularly in those countries, such as Venezuela or Russia, where local fiduciary currencies suffer from high inflation or devaluation problems.
While, on the one hand, investors (especially occasional hobbyists or fans) or entrepreneurs could have shrunk, however, common users have increased, as we actually imagine. Let us note that in Russia there are about 150 million inhabitants, and in Venezuela 30, whereas in Turkey only (which is the country with the world highest percentage of Cryptocurrencies users, 18%) The total population is about 80 million inhabitants, of which up to 14 million are Cryptocurrencies holders.
This broadcast speed would be slightly smaller than the internet between 1996 and 1999 or while the "dot-com bubble” was formed, which then exploded in 2000. In 1996, about 10 million computers were connected to the internet worldwide, while in 1999 global users had reached around 200 million. If the pace were the same, within three or four years, even the number of Cryptocurrencies users in the world could multiply by 20, which is more or less to what the CEO of Coinbase holds when he says in the next five years his number could reach a Billion.