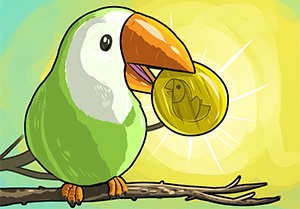 The ICO of the Mexican application Mingo was presented during the Summit Tech Dublin held a week ago.
Mingo is the first major project of Cryptocurrencies fully developed in Ireland. The platform developed a messaging application that transmits messages from multiple applications. In addition, the project team announced an additional 20% bonus for any purchase of a Mingo token (MGT) by May 1, 2018.
Mingo Chat is a free instant messaging application that adds Facebook, Twitter, Steam, Discord, Slack, Skype and IRC Cloud. The application is planned to reduce the number of messages lost and delays in response times, to “Streamline" redundant messages and eliminate the need to change App by streamlining all conversations between Platforms in a single stream of conversation. Mingo will automatically synchronize contacts between applications in order to organize a single message stream. In addition to the seven messaging applications currently supported, the integration of WHATSAPP and Telegram is under development.

The platform currency is MingoCoin (MGT)

Mingo is looking forward implementing a plug-in economy on their platform. This will allow service providers and traders to sell their products and services via plug-in on the Mingo platform. The platform will also allow micropayments, otherwise, too expensive with traditional payment methods. The platform currency is MingoCoin (MGT), which will be usable for intra-platform transactions. MingoCoins, these can be transferred between users and stored in the MingoWallet of each user.
The third element of the platform is MingoPlay, where users can compete in games and skills-based tournaments with the ability to win MingoCoins. Through the plugin system, developers will also be able to launch their own games on the Mingo platform.
Recently, Mingo announced a partnership with Swirlds, creators of the distributed public consensus platform Hedera Hash-graphic. Swirlds is helping Mingo revolutionize his message aggregation technology and create a unique platform for communications, Cryptocurrencies transfer and gaming. This will make Mingo a pioneer in the use of the Hedera Hash-graphic, a technology that can be implemented to a large extent by the blockchain industry.
The ICO Mingo will be active until May 30, 2018, with a soft cap of 8.000 eth and a hard cap established at 45.000 ETH. The Mingo tab (MGT) is a card compatible with ERC-20 and will be issued in the Ethereum blockchain.